How important is the digital age for my business? Here's the latest research!

Internet Marketing revenues in the United States hit a record-breaking high of $10.69 billion for the third quarter of 2013 according to the Internet Advertising Revenue Report figures. It was 4.2 percent rise from the second quarter of the same year.

These numbers are reflective of the Digital Age in which we live. In 2014 these revenue reports will only increase. Continuous growth of technology paves the way for business owners and corporations to capture their share. Continuous growth year after year shows marketers' trust in the digital age. The Digital age is proving to be an incredibly powerful medium more than ever before. 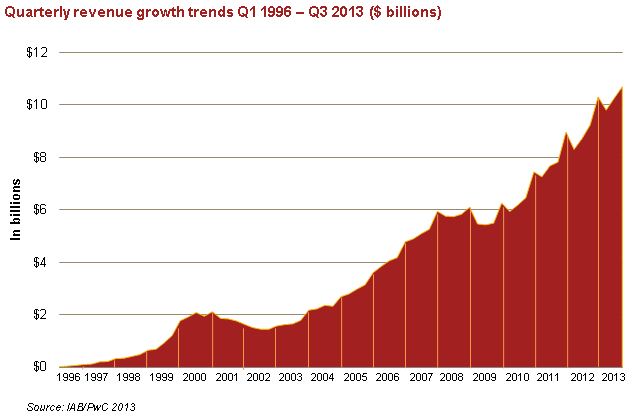 From this graph starting in 1996 to end of 2013 we see the incredible, sustained growth the Internet Marketers have enjoyed.

A brief history on Internet Marketing.
(From who else but Wikipedia)

Steve came in and analyzed our company's web site and SEO strategy. Through his direction we needed to make some major changes and we will continue our relationship with his company.